This was the first time I’ve ever been to the State Farm Bureau Convention.  It was an interesting experience.  I was shocked how many farmers were willing to pay $30 for the meals at the convention, as well as how few young people were actually there.  I’d heard my Matt say that the Farm Bureau population was old.  I thought he ment our parent’s age old, not grandparent’s age old.

That’s probably why I was most suprised that the convention had a breakout session on Social Media.  I, of course, went to that one, as opposed to heading over to the Mall.

The breakout session was hosted by David Cain, the President of MediaSauce, and in his presentation, he covered some important concepts, including:

One of the most intersting things that David talked about, was a group of statistic on how people are persuaded. 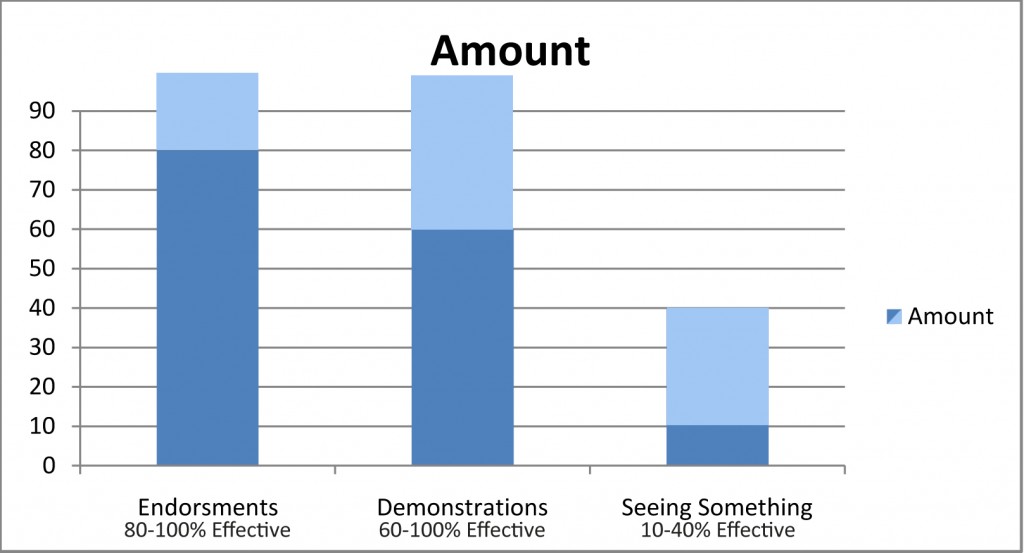 I’ve made a lovely chart to cover that for you… but basically, what you should take from this is that people are most affected by endorsements from others.  In the simpilest terms, this means that what you say about a product or service on Facebook, or Twitter, effects the sales of that product or service.

If  I tell you that I really love Papa John’s Tuscan Six Cheese Pizza, you may try it the next time you are there.  However, if you see that my husband says that he did not like the Double Bacon Six Cheese, you are less likely to buy it.

Social Media is like calling all of your friends at once.

In one message it allows you to:

It allows you to:

That’s nice.  Where do I start?