My fried Laci is having a baby, so I wanted to do something special for her.  She’s doing her baby boy’s room in frogs, so I decided I would make her a frog quilt for him.  I went through several iterations of the design before I settled on the final one, which has a big lily pad, some cattails and even a dragonfly. 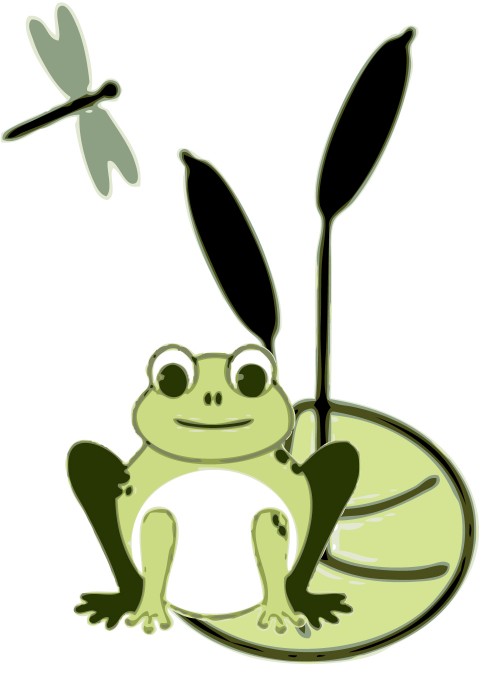 I really didn’t have any idea how I was going to put the quilt together, so once I got my design figured out, I printed it to scale (on several pieces of paper) and taped them all together.  I figured that would give me something I could work with.  And it did. I was able to lay my background fabric on top of the design and figure out how to build the quilt as I went. 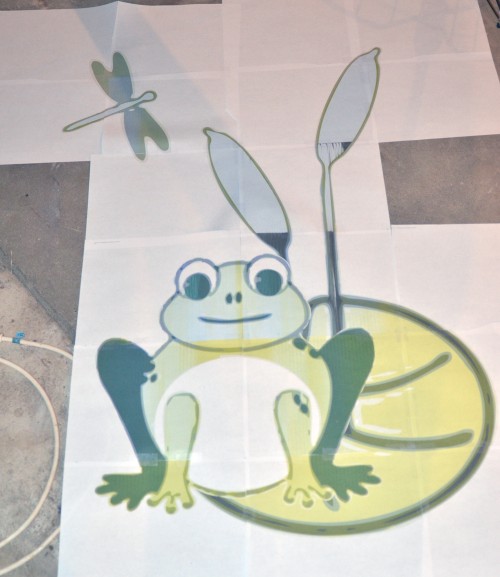 Since it wasn’t touching anything else, I decided to start with the dragon fly.  I really wasn’t sure how to start with an applique, so instead of traditional applique, I decided I would make it so that the wings flapped.  That was easy.  I traced the wing design and simply stitched my fabric together with a little interfacing.  It allowed me to have clean edges and wings that were pretty on both sides. 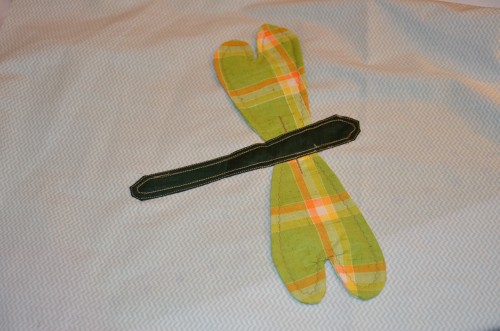 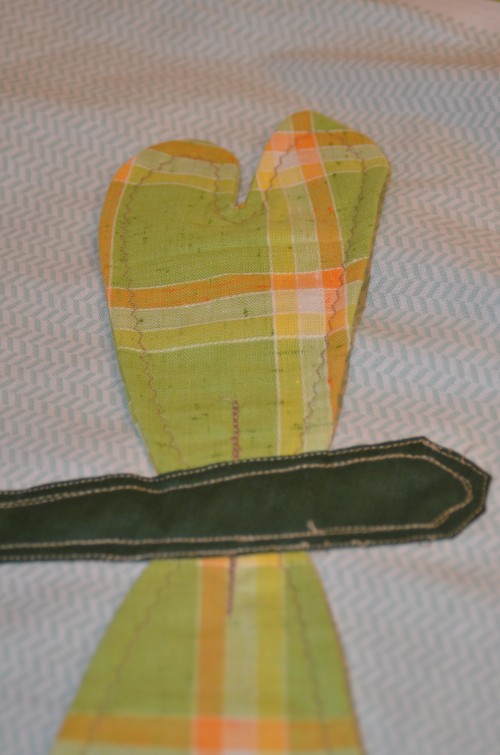 After I did the dragonfly, I decided the best solution was to work from the back toward the front.  That meant the next pieces I needed to add were the cattails.  I tried out several different prints and fabrics, and finally decided on some amazing chocolate brown fleece. Because of the way the fleece was made, I decided to use my button hole setting for the stitching and do a raw edge applique. 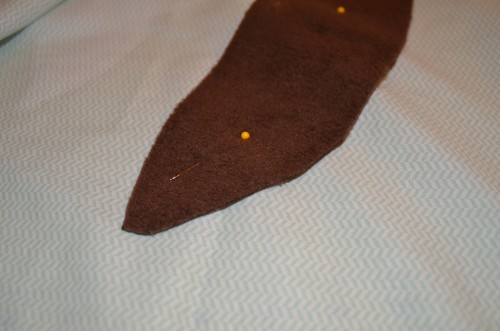 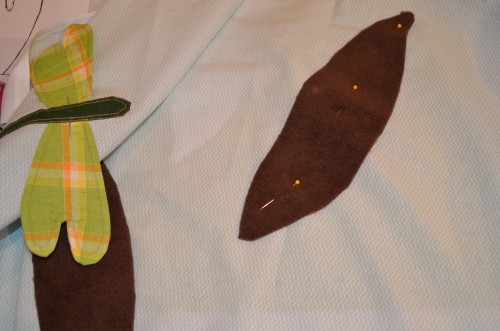 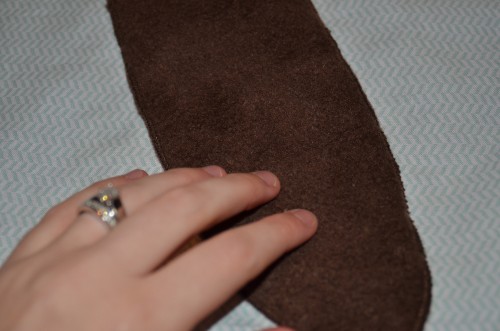 Once I had added the fleece, I remembered that since it was a baby quilt, I could go a little wild with the sensory stuff, so I decided to use a little of the leftover moleskin from my Weekender Bag for the stalks on the cattails.

The next step was to determine what colors to use for the frog and lily pad, so I laid out a few variations.  I finally decided on a dark green lily pad with a lighter green frog. 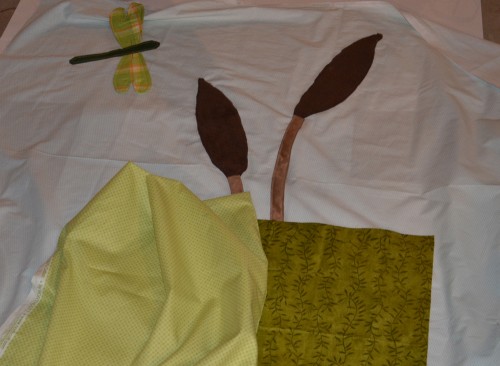 I cut out the shape for my lily pad from a fat quarter of fabric and then started cutting out the shapes for the frog.  I actually ended up using a dinner plate and a salad plate for the body and stomach sections.  I also chose to incorporate some batting in the stomach section. 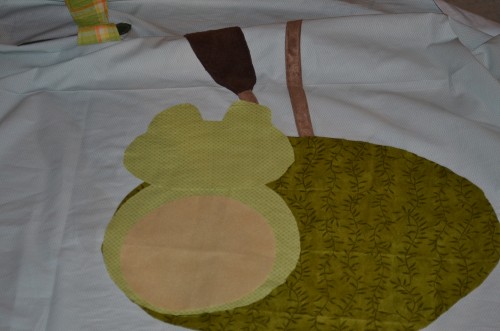 I also decided that the legs of the frog would be loose like the dragonfly wings, so I used the same technique to create them. 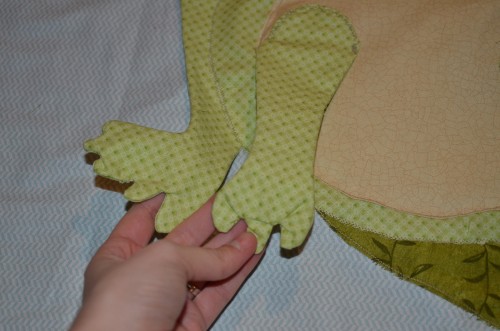 I created all the legs, and attached the two front legs to the center part of the body before I sewed it and the batting down.  Then I set in the back legs behind the main body section so that when it was sewn down the legs would be attached in the process.

The final part was the head, which was pretty much completely free form.  I created a frog like shape for the head, then made eyeballs from muslin, and irises from left over bits of the lily pad material.    I made the eyes puffy with batting and then added nostrils and a mouth before adding more batting behind the entire head and raw edge appliqueing the entire piece down. 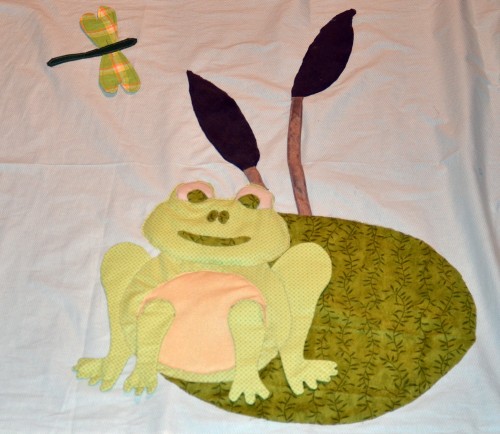 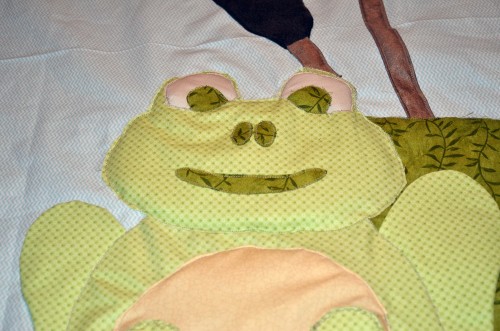 I decided to back the quilt in a coordinating neutral Riley Blake print. 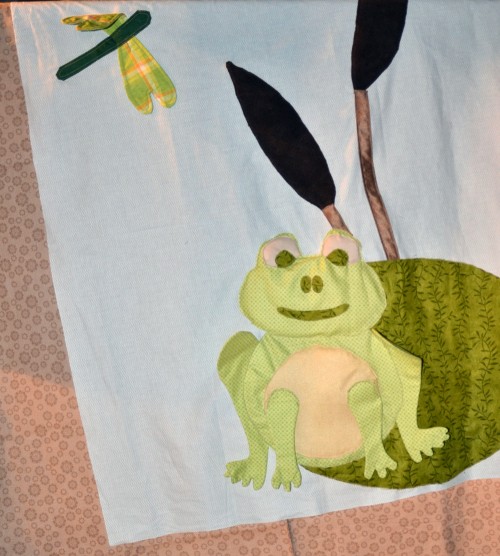 I quilted the lily pad and the outline of the frog in olive green, and did the water area in a variegated blue.  For binding on this quilt, I decided to use a vintage cream colored lace around the edges.  It looks pretty darn cute if you ask me. 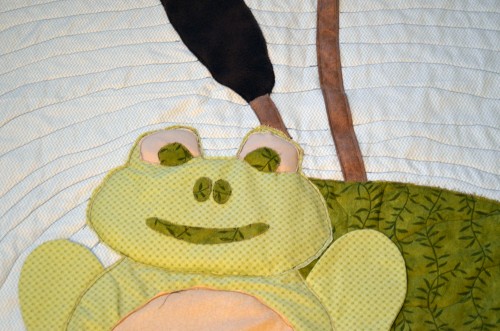 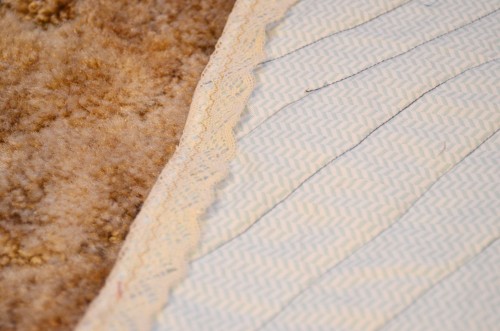 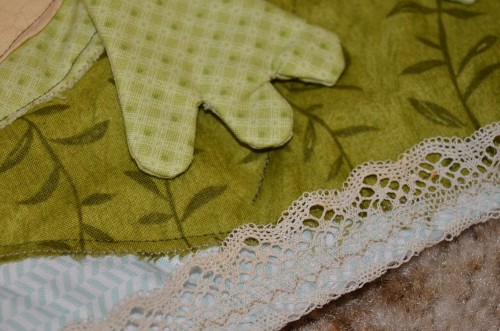 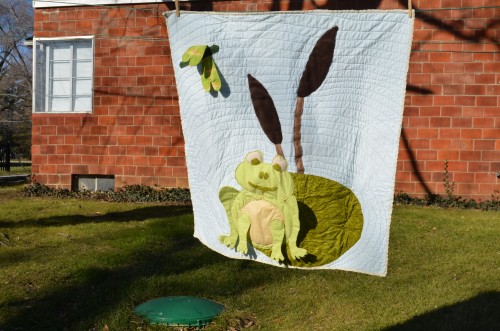