Skip to content
So I took some pictures of my hardest quilt. I literally cried over this one before I was done. Little did I know that “Star of Bethlehem” (aka Lone Star, Witness, and several other names) is considered one of the toughest patterns. Why? Because if your template is the least bit “off”, it won’t work. 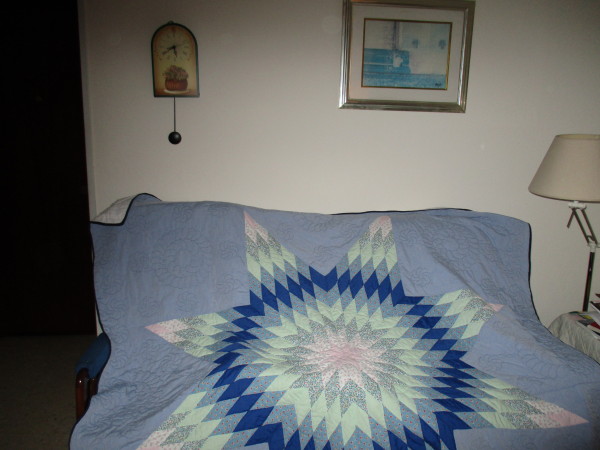 I got my template from a Spanish quilting magazine many years ago…and later discovered that particular mag had pirated the pattern entire from an even older American quilting mag, when someone gave me said American mag and the pictures were identical! Well guess what–the template was way off! I didn’t know that, so I merrily cut and stitched the little diamonds together by hand–no strip-cutting, I just went ahead and made my 8 points. Stitched them together two by two, fine. Four by four, no trouble yet. Joined the two halves together and GUESS WHAT: the centre of the quilt rose up to a point and there was no way I could get it to lie down. I ripped it apart and sewed the points together again…same result. (This is where I cried, at least once). Put it away.
Fast forward a year or so and I met an Australian lady who looked at it and said, “Eight points? Forty degree angle, luv. Your angles are daggy.” Turns out “daggy” means “messed up”. Then she said, “Leave it with me” and proceeded to trim the points so it would lie flat. Shazam! 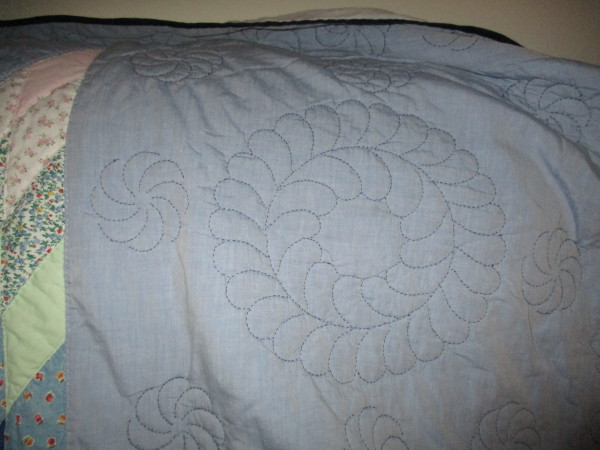 Then I got to do the fun part (for me)–the hand quilting. Just for a difference, I used a circular motif between the points and outline-quilted each diamond. It’s not exactly rectangular because I didn’t have enough background fabric, and there wasn’t any more where that came from–story of my life. It’s too small for the bed, but it makes a nice cover, and I have been known to throw it over the dining table (hence the tea stain in the centre. I don’t do that any more.)

But I learned a lot. Lesson One: Just because a template is online or in a book doesn’t mean it’s right. Lesson TWo: Just because a project doesn’t work does not mean it’s your fault it’s not working. Lesson Three: None of my friends can quilt, most can’t even sew–and they are all impressed with my daggy little quilt!!
I love my daggy little quilt. But no, I don’t think I’ll ever make another one of these.
Posted in Quilting and tagged Lone Star quilt, quilt, Quilting, quilts, Star of Bethlehem quilt