Another month gone. Can you believe the year is a quarter of the way through? Lots has happened this month. I’m an aunt (again).  My sister had her first baby, early in the month, and it seems to have put me on a children’s literature kick. I have to admit it was fun to read all of those children’s books, and it certainly bumped up the number of books I was able to read this month.

The Old Curiosity Shop is a novel by Charles Dickens, which was originally published as a serialized story in Dickens’ magazine.  For those of you who are not familiar with this particular Dickens’ tale, the story follows a little girl named Nell and her grandfather as circumstances in their life cause them to undertake a long journey.  Along the way, we learn more about their friends, acquaintances, and enemies, and how their stories are intertwined.

The main reason I chose to read this book was that I’m trying to make an effort to read more classic literature. I do find most classics to be difficult to read, due to differences in vocabulary and cadence in the text. However, the concept of the story was quite interesting, and now that I finished the book, I’m very glad to have read it. 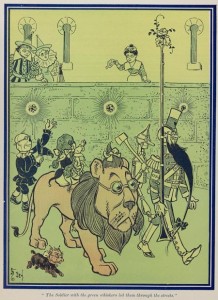 The Wonderful Wizard of Oz

The Wonderful Wizard of Oz was the first Oz book that L. Frank Baum every published. Originally published in 1900, Baum intended his story to be written solely to please children of the day; making it a “modernized fairy tale” full of wonderment and joy with the heartaches and nightmares left out.

Living in today’s world, it’s hard not to know the basic premise of this book, which inspired a movie of the same name, as well as multiple stage adaptions (including The Wiz). However, while the basic story is there, many things have been left out or changed in these adaptions. Did you know that Glinda, the Good Witch of the North, was a wizened old woman? Well, she was.  This has been an enjoyable re-read for me, as I don’t think I’ve actually read this story since middle school.  I have a beautiful vintage paperback edition of this book, but it is also available as a new book, or to download for free for Kindle.

The Marvelous Land of Oz

The Marvelous Land of Oz is the 2nd book in L. Frank Baum’s Oz book series.  This particular novel follows the character of Tip, who escapes from an evil witch named Mombi and travels, along with a pumpkin-headed man and a wooden horse, to help the Scarecrow and Tin Man defeat General JinJur who has taken over the Emerald City.

It was nice to read this one again, as I had forgotten most of the details, but I am happy to report that I did remember the most important part about finding the rightful ruler of Oz. But, since you might not know this story of Oz, I’ll leave that secret for you to discover.

Alice’s Adventures in Wonderland is a children’s classic, written by Lewis Carroll. Originally published in 1865, this book holds up surprisingly well. The novel follows Alice, as she pursues the white rabbit down a hole into Wonderland and meets all manner of interesting characters, such as the Cheshire Cat and the Mad Hatter.

Many people know this tale from it’s various film and television adaptions, but it is well worth the read, as many interesting details are often left out. I enjoy this book enough that I have multiple print copies, as well as an ebook version.

Through the Looking-Glass and What Alice Found There

Through the Looking-Glass, published in 1871 by Lewis Carroll, is the sequel to Alice in Wonderland. This books tracks Alice’s adventures as she steps through a mirror into a topsy-turvey world, laid out just like a chess board. This is the story where we meet Tweedledum and Tweedledee, are told the story of the Walrus and the Carpenter, and learn about the Jabberwocky. You will find that several parts of this tale are incorporated in Disney’s animated version of Alice in Wonderland.

Animal Dreams is the first novel I’ve read by Barbara Kingsolver. I know a lot of people love her work, and having read this novel I understand why.  It took me a bit of time to get into the story, but once I did all of Cosima’s emotional conflicts became my own.  This is one of those great books where the only epic journey you need is emotional growth.

Ozma of Oz is the 3rd book in the Oz series by L. Frank Baum. It follows the adventures of Dorothy as she is swept off a ship into the fairy land of Ev, is saved by the royal princess Ozma of Oz, and travels to the kingdom of the Nomes to save the Queen of Ev and her 10 children.

Just like all Oz books, there are lots of interesting characters.  This one contains a talking chicken and a clockwork man. However, I am beginning to notice a few plot holes in the group of books as a whole.  In this novel and the 1st, the Deadly Desert that surrounds the Land of Oz is named so, because touching the sand will kill you. However, in the second book, a chase scene concludes in that desert, with everyone surviving.  Perhaps that will be explained later, but for now, it bothers me. Dorothy and the Wizard in Oz

Dorothy and the Wizard in Oz is the 4th Oz book by L. Frank Baum. This book follows Dorothy and her cousin Zeb, as they fall into the Earth during an earthquake and travel with the Wizard of Oz through several underground kingdoms, until they get to Oz. I’m sure you’re starting to see a pattern in my reading this month.  There are still several more books in the Oz series, but I think this will be the last one I read for a bit, as I’m feeling the need for a read with a bit more heft.

2 B R 0 2 B is a short story by Kurt Vonnegut. It barely took me 20 minutes to read, and is available for free on Kindle, so I can’t think of a single reason why you shouldn’t give this a try. Do it now.

My Name Escapes Me: The Diary of a Retiring Actor by Alec Guinness- This is a book I’m keeping by the bed to read for a bit if I’m not tired at bedtime.

Mort by Terry Pratchett- This is the 4th of the Discworld books, but the 1st of the books relating to Death.  I read it’s “sequel,” Reaper Man last fall.  Thanks to the Book Depository, I have beautiful special editions of all of Pratchett’s Death books.
Tales of Terror and Mystery by Sir Arthur Conan Doyle- I just started reading this one last night, so there is nothing to report yet.

Have you been reading much this month? I’d love to know what books you’re reading. Do you get into a “groove” reading a certain type of book?