I’m super excited that I hit my reading goal for the year this month.  I’ve now read more than 52 books, so everything else I read it just icing on the cake.  With 4 months left, I may end up getting to read a lot more than I expected this year. 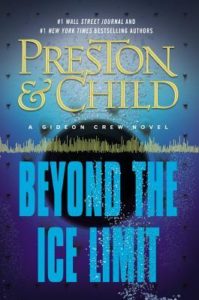 Beyond the Ice Limit

Beyond the Ice Limit is Douglas Preston and Lincoln Child’s most recent thriller.  It is the 4th book in the Gideon Crew series, and a sequel to their novel The Ice Limit.  After reading The Ice Limit several years ago, I’m glad to have such a good conclusion to the story. And I’m even glad it took so long. The books following The Ice Limit gave the character of Glinn time to develop throughout other novels before bringing this conclusion to his original story, while still allowing for future books featuring both Glinn and Gideon Crew.

Personally, I think you should read all of Preston & Child’s books, because I think they are amazingly well written physiological thrillers, which often feature interesting science-fiction elements. However, you don’t need to have read any of Preston & Child’s other books to follow the plot in Beyond the Ice Limit.

I got a chance to read several of my (new to me) Nancy Drew novels this month.  I love to read a bit before bed, and the Nancy Drew series is one of my go-to choices for that sort of reading.  They mysteries are always interesting, but I never truly worry for the character’s safety.

The Clue in the Old Stagecoach

Originally published in 1960, The Clue in the Old Stagecoach is book #37 in the Nancy Drew series, written by H.S. Adams as Carolyn Keene. This particular novel follows Nancy and her friends as they vacation at Camp Merriweather and try to find an old stagecoach containing a secret that may help save the town. As always, it was an interesting mystery. Though I strongly feel that in real life Nancy Drew would need to fail once in a while. Also- how is she not dead yet?

The Clue of the Dancing Puppet

Originally published in 1962, The Clue of the Dancing Puppet is book #39 in the Nancy Drew series. This novel was also written by H.S. Adams as Carolyn Keene.  The Clue of the Dancing Puppet follows Nancy and friends as they investigate the appearance of a life-size dancing puppet at the Van Pelt estate, home of the Footlighters, a local acting troupe.  In this novel, Nancy is trying to discover why the puppet has begun to appear at the estate, and who is controlling it.  While I did enjoy this mystery, it seems the higher the number of the book, the more outlandish I find the plot.

Originally published in 1963, The Moonstone Castle Mystery is book #40 in the Nancy Drew series.  Written by H.S. Adams as Carolyn Keen, this novel follows Nancy and her friends as they take a trip to Deep River Valley to help Nancy’s father solve a missing person’s case for a client.  Along the way, Nancy and her friends investigate an old castle, and discover a gang of thieves.  The sheer number of helpful coincidences that befall Nancy in The Moonstone Castle Mystery is almost laughable, but I still enjoyed following her escapades. 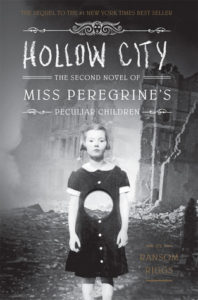 Hollow City is the second novel in Ransom Rigg’s Miss Peregrine trilogy. This book begins where the last book left off, after the bombing of Chairnholm with Jacob and his new peculiar friends trying to get to London and save Miss Peregrine.

One of my favorite things about this series is the use of vintage photos in the telling of the story.  And while, I liked the first book better, Hollow City was quite enjoyable, and I’m looking forward to reading the final book.

Storm Front is the first book in the Dresden Files novels by Jim Butcher.  I first discovered the character of Harry Dresden in the short lived Dresden Files television show.  I was so enamored with the character, that I’m glad to finally have had the chance to read this first book in the series.  Storm Front follows Dresden as he tries to help the police solve a mysterious murder involving magic and save himself from the consequences.   This novel is written with quick with, full of great one-liners and hard to put down.  I certainly recommend you give it a try. 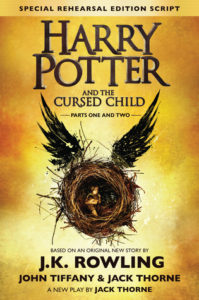 Harry Potter and the Cursed Child

Harry Potter and the Cursed Child is a play by J.K. Rowling,  John Tiffany, Jack Thorne.  It’s the 8th and final story in the Harry Potter saga. The play picks up where Deathly Hollows leaves off, with Harry’s 2nd son, Albus Severus getting on the train to Hogwarts.  Time quickly passes from there. We see Albus’ life at Hogwarts through the first few years, until suddenly a time-turner is discovered, throwing everyone’s lives into chaos.  I’ve seen some articles that say Hermionie’s character was done a disservice in this novel- that it shows she would be much less without her relationship to Ron, but I didn’t really take the events of the play that way.  For me, Cursed Child was a study of how our own needs and experiences and children affect parenting, and the redemption that can be found in discovering that sometimes your own child doesn’t need the parent you needed. 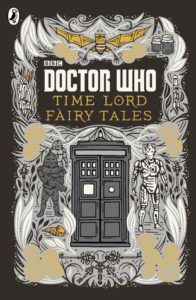 Time Lord Fairy Tales is a book of short stories by Justin Richards (with beautiful illustration by David Wardle) retelling classic fairy tales using familiar creatures and characters from the Doctor Who universe.  As a fan of the Doctor, I was thrilled to discover such a fun retelling of classic fairy tales.  Needless to say, if you leave a kid at my house, these are the fairy tales I’m reading (Kayla, you have been warned).  My favorite story in the book was Helena and the Beast, a retelling a Beauty and the Beast in which the Beast is a man who has been turned into a monster by a temporal disturbance and it is science, not magic, that will save him.

The Scarecrow of Oz

The Scarecrow of Oz is the 9th book in the Oz series by L. Frank Baum.  This book follows the adventures of Trot and Captain Bill as they are sucked into a whirlpool and journey to escape a sea cave and find their way home.  I’m not sure why Baum chose to title the book The Scarecrow of Oz, as Scarecrow didn’t show up until the last half of the novel. But other than his odd naming conventions, I felt this was an enjoyable book.  One thing I did notice was that there are events referenced in this novel which I believe took place in Sky Island, another Baum book, but not part of the Oz series. Perhaps I should be reading all of the Baum books in order, instead of just the Oz books.

Do you have reading goals? How are your doing at meeting them?