We’re at 33 weeks! That means that we only have 3 more weeks to full-term!  It’s been a bit of a busy week for Spot.  We had Baptism class last Thursday night, a non-stress test at our regular OB on Friday, and Tuesday morning we had another anatomy scan.  And since we hadn’t had one since the hospital stay, it’s that anatomy scan that everyone seemed to be waiting on.

Apparently, when your baby doesn’t follow the standard growth chart, everyone wants to know just how big she is now.  Personally, I’ve been hoping that she stays on the smaller side so that delivery can go as quickly/easily as possible. Preferably something similar to the Doritos commercial.

Of course, we still have a way to go before that. And, as I said, I know that you just want to know the details on how Spot is doing.  As of Tuesday, Spot was measuring approximately 3lbs and 14 oz.  That puts her in the 12th percentile, so it looks like she is still going to be a tiny baby.  She was also agreeable enough to let the ultrasound tech get an image of her face without a hand or foot in the way. 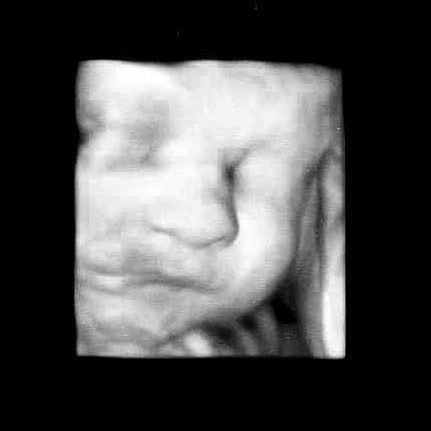 I am pretty happy that it looks like she will be on the smaller side.  Her cousin, who will be just a little over a year older was also a small baby, so we might be able to borrow some things if we need to. And it would mean that she will likely be able to wear all the cute baby clothes she’s going to get at her shower for a longer time. And speaking of the shower, that’s coming up this weekend. Being anxiety girl, I’m more than a little stressed about it, but I survived 2 bridal showers, so I’m sure I will survive this.  And we’ve already gotten some lovely gifts in the mail from people who won’t be able to make it to the shower.

I have also been working a bit more in Spot’s room. Nothing major, but I have managed to get Spot’s library together, find homes for most of the stuffed animals, and get the top of her changing table set up (yea for early gifts).

I think I’m as caught up as I can get before the shower.  There will be lots to do after that, with new baby clothes, sheets and things to clean, and a diaper bag to get ready.  Plus, I will have to start thinking about what I need in my hospital bag.