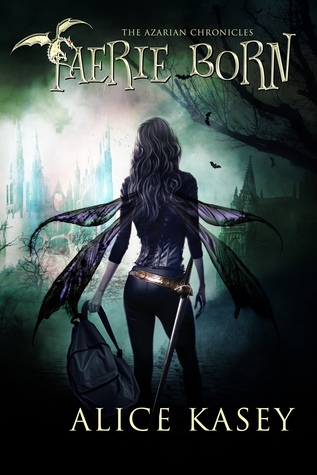 So what’s this book about anyway? A Synopsis –

When her friend Jade is taken by strange creatures, Alexis crosses over into the faerie realm of Azaria intent only on saving Jade and returning home. Instead, she ends up on a quest to defeat the dark lord Morlin where startling truths are revealed.

Those closest to Alexis are not who, or what, they appear to be and she, the Chosen One, is destined to be either Azaria’s savior or destroyer. (via Goodreads)

But I’ve never heard of this author….

Kasey is both a new and local (to me) author, so I wanted to take the time to write up a full review of her book for you. I actually met Kasey and discovered her book at my local Barnes and Noble when she was there signing copies.

So how was it?

When I started reading the book, it moved slowly enough that I thought the the battle against a bad guy called Morlin would be the epic climax of the entire series of books. But suddenly, once the characters were thrust into the new realm, everything began moving much faster.  I would have honestly liked to have had more details about the new and fantastical realm that they were in.  I felt like Kasey could have fleshed it out, so her world would feel more real to me as a reader.

There were also a lot of characters to keep track of, some of which had similar names, so I occasionally got confused, and had to re-read sections to make sense of what was going on.

There was also a grammatical error that ran throughout the book. The word “then” was replaced with “than” throughout.  I feel like this is something that her editorial service should have caught, and since it was every time, might even be an error they are responsible for.

I also had some issues with the design of the book.  The cover is beautiful, but once I got to the inside, I noticed some issues that probably didn’t occur to her as a first time author of a self published book.

Even with those problems, I think Kasey has a lot potential as an author.  Her story was engaging, and I am looking forward to reading the second novel in her Azarian Chronicles when it comes out in the spring – hopefully with some edits to the way the book is set up.

Where can I get my copy?

Faerie Born is available in print and digital from both Amazon and Barnes and Noble.