Cabbages and Kings is a work on fiction by O. Henry. Published in 1904, it’s not the type of book I would normally write a full review for, but I’ve found a have a lot to say.

I downloaded a free digital copy for my Kindle app (also available in print), because I recognized the title phrase from the story of “The Walrus and the Carpenter” in Alice in Wonderland. That was the one and only reason I had for downloading this book. I didn’t even read the synopsis, which actually reads as follows: 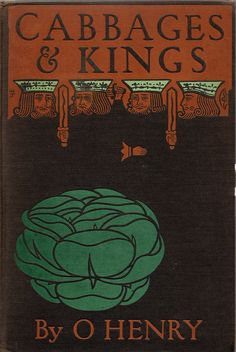 A series of stories which each explore some individual aspect of life in a paralytically sleepy Central American town while each advancing some aspect of the larger plot and relating back one to another in a complex structure which slowly explicates its own background even as it painstakingly erects a town which is one of the most detailed literary creations of the period. In this book, O. Henry coined the term “banana republic”.

I wish I had gone at this book from the beginning as a collection of loosely interconnected short stories. (Why didn’t I bother to read the synopsis?)  It would have made the book more enjoyable from the beginning.

Cabbages and Kings was well written, if difficult to follow. Being an older book, the writing contains quite a lot of formal and archaic language. That meant that I, as a native English speaker, spent more time than I would care to admit using the dictionary function in my Kindle app.

The book also contained many words and phrases written in Spanish, which was the native tongue of the fictional country of Anchuria, in which a majority of the tale takes place. So, I ended up needing to use the translation functions in my Kindle app to make sense of some of the finer points of the stories.

But for me, the most problematic issue was overt racism. The book is written about American ex-patriots living in South America, so I expected the book to focus on their lives. I did not expect the disparaging remarks he made of the peoples of the area. There were several passages throughout the novel which were downright offense to the characters of color.

[In describing a man of Native American descent participating in a fight against the native people of the fictional Republic of Anchuria in South America] The matter of his proclamation seemed to be a co-operation of the Carslise war-whoop with the Cherokee college yell. He went at the chocolate team like a bean out of a little boy’s nigger shooter.

[In describing an American of Irish descent who plans to help with a revolution in South America] ‘Here,’ says I to myself, ‘ is the romantic haunt of the revolutionists. Here will Clancy, by the virtue this is in a superior race and the inculcation of Fenian tactics, strike a tremendous blow for liberty.’

As you can see, some statements were more offensive than others, if such a thing is possible when making generalizations about a race, or a country and it’s peoples. I’m sure that these were general sentiment at the time, but it still bothers me. And it made the book more frustrating to read.

How do you deal with problematic issues, such as racism, in books that you might otherwise enjoy?