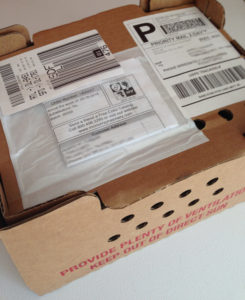 As I’ve mentioned in previous Coffee Talk posts, my husband and I will be raising some ducks.  Their coop has been mostly complete for a while now, just waiting for the ducks to arrive, and they finally did last Thursday morning. We received a total of 10 ducklings, which were shipped in a package about the size of a shoe box. Don’t worry, the ducks are tiny and it was plenty of room. There were air holes and everything too (see left).

Because we purchased our ducks for egg production, we chose to get mostly female ducks. If the duck sexers (yes that’s really a job) were correct, we have 9 females and 1 male duck.  Only getting one male will also keep us from having issues with multiple male ducks (or drakes) fighting over the hens in such a small flock.

As I mentioned on Friday, due to the recent cold snap, the ducklings spent their first couple of days at our home living in a kiddie pool in our basement.

But they got to move out to their new home in the duck coop on Sunday. Once the pool was all cleaned out, they even got to get in it again to go swimming. And you’ll never really understand the phrase “like a duck to water” until you seen a flock of tiny ducks jump right in and go for a swim.

Now, because the ducks are still so small, I put the pool on a slight incline so that they could have both water to swim in, and a dry space to walk around on while I had them out of the coop. They seemed to be pretty happy with their new surrounding, and I hope the continue to do well in their new home.

Do you live somewhere that allows you to keep poultry, or other livestock? If you do, do you have any?