This week we will be discussing Plant a Seed, chapter #4 of Julia Rothman’s book, Farm Anatomy.  This particular chapter covers quite a bit of plant related material including:

One of the things that I liked about this section of the book, it that it mentions several varieties of most of the fruits, veggies and grains.  However, I was sad to see that Julia left out the old-fashioned crook neck squash in the section on squash varieties.  I’ve canned a couple of varieties of squash.  The first time I canned squash, it was Butternut squash from our Young Farmer’s trip to Frey’s Produce.  I have to say, it made a pretty decent pie… but this summer one of my old neighbors grew some old-fashioned crook neck squash.  I don’t mean the little yellow summer kind…. I mean big, huge squash.  The one I was given to can, was one of the small ones, and it weighed 12 pounds.  I liked several things about this squash better. 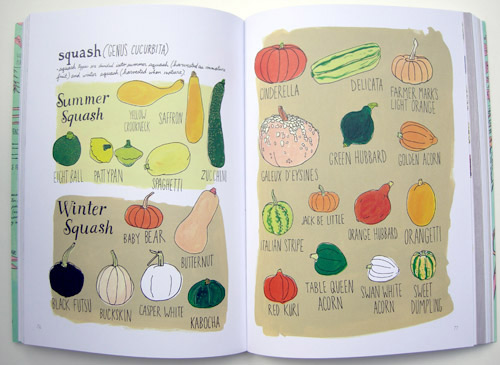 So… I wondered…. why was this particular variety left off? First, I’m sure that there are a lot more than 26 varieties of squash, which happens to be the number pictured.  Rothman probably decided to use the most popular or common ones in her book.

Now I ask myself?  Why isn’t this kind popular and common… then I remembered something that my neighbor, who was growing them, told me.

You can have the squash to can, but I need the seeds back.  You can’t buy them anywhere.

Well, I bet it’s hard for something to be popular if you can’t get the seeds anymore.  Fortunately for us, The Splendid Table does give us a few places to look for those now defunct heirloom varieties… but in the mean time, I guess I’ll have to get some dried seeds from the neighbor.

I really did find this chapter particularly nice for it’s recipes – Because what good does it do you to grow something if you don’t know what to do with it?  – and for it’s information about garden bugs.

Really, the only thing it was missing – aside from my old-fashioned crook neck squash, of course – was helpful descriptions about what made each of the varieties of the fruits, veggies, and gains pictured different and special.  What is the flavor like?  The texture?  Does one variety do better in a particular soil or climate?  Maybe that’s another book entirely.  And think…. illustrations have already been completed for the beginning of each chapter. 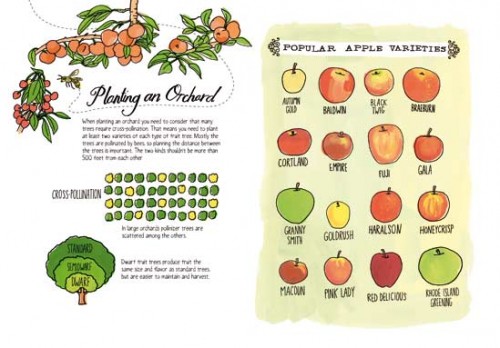 Well, that’s all for this week.  Come back next week, where I will tell you what I thought of our next chapter, Separating the Sheep from the Goats.

Read all of the Chapter Reviews

Ch. 5: Separating the Sheep from the Goats