This is the quilt I think of with the greatest satisfaction. The “design” itself is no big deal, just appliqued hearts, but the fabrics are wonderful, considering that they are all scraps that were gifted to me about a decade ago when the WorldWideQuilting Bulletin Board was active.

The recipients were both Christian believers, and as I pulled out random fabric scraps I realized I had enough to tell the creation story from Genesis 1.

Three blocks were also made to represent creation of the “greater and lesser lights”, stars, sun and moon etc.
Row 3 represents the fish, birds of the air, animals etc. (I couldn’t resist the bugs!) The Teddy Bear fabric was as close as I could get to “man” in my stash.
As you can see, I made two identical “halves” so the quilt is never “upside down” (and because I didn’t have more variety of fabrics to play with.) 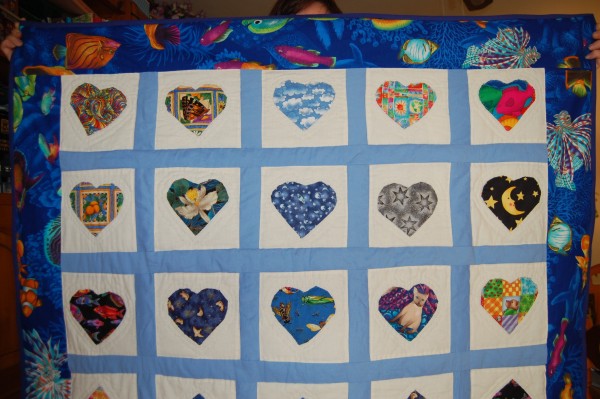 I used pale blue for sashing, partly because it was what I had enough of, but also to represent the sky and water…and the bright fish fabric was just so beautiful.
Posted in Quilting and tagged Anna, Anna in Spain, creation, heart, heart quilt, hearts, quilt, Quilting, quilts